I Huffed and I Puffed (Race Report)

Well, it's over. The 15K relay in Sheffield, AL was this morning. The race is officially called the Huff 'N Puff 15K race and relay. Nate, myself, and Andrea (in that order) participated in the relay portion. So what follows is the race report: 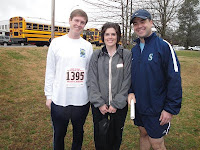 We got to Florence, AL last night and checked into our room at the Hampton Inn. It was like a mini-getaway for Susan and I so we were excited just to get to stay in a hotel by ourselves. Not that we didn't miss our boys...a little :) Nate, Andrea and their friend Ladona arrived soon after and we went to dinner together at a local steakhouse. The meal was great and it was nice to just be with friends in a new place. We got back to the hotel around 8:30 or so and I crashed. I think I made it through about 15 min. of TV before my eyes starting getting really heavy. I was out by 9. We slept until 7, got up, showered, ate the hotel breakfast, and headed to the race. We checked in, got our bibs and realized we still had almost an hour until the start. So Susan and I got into our car and decided to drive my leg of the relay. It was a pretty easy co 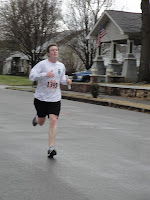 urse from what I could see for my part with one exception. Around mile 2 of my 3.1 was a huge hill. It wasn't too long, but it was pretty steep. I had been warned but I knew it wouldn't be easy. I had Susan just drive me to my start location. They had buses that would take you, but I decided I'd rather be in my car. I made sure that was ok with the race director. He was fine with it. We got to my start location (the 5K point) around 8:45 with the race scheduled to start at 9. Nate would be our first leg.

As I already mentioned, we had 66 min. as our time goal. This was a 7 min pace and we were hoping we could do it. The weather was great. It had rained last night and was raining when we got up, but the rain was very light at the start and kept coming and going. Nate's PR before today was somewhere around 25:30 so I knew to expect him around that time. I was shocked when I saw him coming down the street in the 24th minute. I knew he was going to have a new PR and he did (25:17). Way to go, Nate! He handed me the baton and I was off. I started out fast, but I knew that's what I needed to do. I was trying to make up some 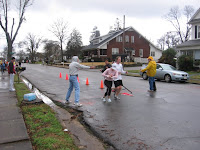 ground because we were in fourth place in the relay division at that point. I also knew I would have to slow down at that hill so I wanted to run fast at the start since most of it was downhill. I passed several people before I got to the hill including two of the three relay teams in front of us. When I got to the hill, I did the best I could but it was brutal. It hurt and I definitely slowed down. Eventually, it evened out again and my pace picked back up. My legs were fine the entire time, but my lungs were on fire and I was breathing hard. I knew I would be thrilled to break my PR (19:55) but my goal was just to get close to it, in the low 20's. I finally hit the straight-away and could see Andrea up ahead, our third leg. I came in and handed the baton off to her. My official time was 19:58, so I missed my PR by 4 seconds. I f 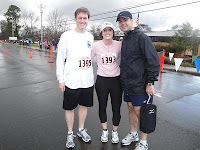 eel pretty sure that without that hill I would've had it, but I'm happy. I feel sure I can break it one day. Andrea had a great third leg. She definitely had the toughest leg as far as hills go. She had several but she came in at 20:03 which was outstanding! So our overall time was 65:18 meaning we beat our goal.

We ended up in first place for our division (co-ed) out of 10 teams, and 2nd overall. The only relay team that beat us was a father and son. The father ran the 1st and 3rd legs and the son ran the 2nd. They ended with a time of 63:45 so it was pretty close. They both did great, especially the dad. But we were happy to win our division. We got medals and enjoyed the awards ceremony and FOOD afterwards. 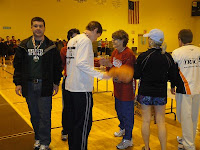 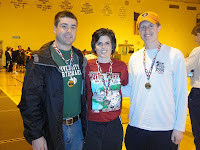 Overall, it was a great day and I loved being part of this team. I would love to do something like this again at some point. I would also be interested in doing the 15K alone. I think I could've placed. Nate and Andrea's friend Ladona placed first in her division running the 15K. She did very well!

So there's the report. Looking now to our next race...Carter's first 5K in less than a month. Can't wait for that one. More to come. Hope everyone has a great new week and a wonderful Spring Break!