We Have a Winner!

I mentioned in the last post that I'd put some pictures up from our trip to Disney, but to be honest, I'm too lazy to upload them on here. So I'll put the video I made instead. It's better than any pictures can do. Check it out - then read below.

Monday morning, my 8 year old, Carter and I ran in the Memorial Day Dash 5K here in Nashville. It started at Greer Stadium where our minor league baseball team, the Sounds, play. It started outside the stadium but during the first half mile, we were ush 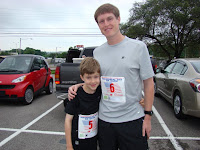 ered into the stadium and got to run the perimeter of the field. We then ran up to Fort Negley which is a pretty big hill top fort in Nashville. I'm assuming it has some Civil War history to it. I teach World History, not U.S. Sorry. Then, we ran past the Adventure Science Museum and into the Nashville City Cemetery which does have a lot of Civil War heroes buried there among other famous Nashvillians. We knew the finish was going to be in the cemetery, but you get to it at mile 2 so they wind you around A LOT inside the cemetery. We could see the finish a half mile before we got there. 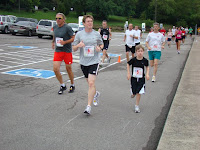 1. We had not trained for this one like we did for the last. Plus, we were at Disney last week and he didn't run at all. Just walked a lot.
2. The first race was FLAT. No hills at all. This one had several. The downhills were nice, but that meant there were several uphills. Personally, I like to keep pace or go a little faster on uphills but not the boy. He told me a few times to slow down and it always seemed to come on the uphills.

So I was not expecting a PR. I was just trying to do our best. We hit our first mile at 8:17 which was really good. Last race our first mile was 8:30. We hit our 2nd mile around 16:30 which meant we had run faster for the 2nd mile. I knew at this point that he could PR if we kept pace but I wasn't sure if we could. It was hard to read him. He said he was fine but he wasn't talking much or giving me any good/bad signs. I tried to keep pace as much as possible. When we saw the finish with .1 left, I told him to give it all he had and he sprinted. He sprinted like crazy. I was so proud. We came in at 26:01 - a 22 second PR for him. I was so impressed. I don't know how we did it.

We stuck around f 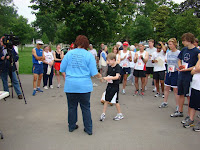 or the awards not sure if he had placed. There seemed to be a lot of kids there but it was hard to know if they were in his 0-9 age bracket or not. We had passed a boy around mile 1 1/2 that I thought was in his age group. They went from oldest to youngest so we had to wait around until the end. They announced 2nd place - the boy we passed. Then they announced first place - Carter Thweatt. He won his age group! Again, I was so proud. He got a certificate which is now hanging on his wall. He was all smiles all day.

It was a great Memorial Day and a great race. If I had gone all out and run my hardest, I think I would've placed 3rd in my age group, but who knows. I don't care. I enjoyed running with Carter. I can't wait to see him race again.