Planning to run three times this week. I'm still slowly getting over my heel injury. That one was a doosie. Doosie. What a weird word. Is that even how you spell it? This is telling me it's misspelled, but it has no suggestion. But I can't think of a synonym. It was a doosie of an injury. It has taken forever to get better. It's still not 100% but it's much better. I ran 5 miles yesterday and the heel hurt a little this morning but not nearly as bad. I plan to run tomorrow and Friday. I want to get back into it....just have to wait for my rickety old body to kick in. Doosie? Doosy? Douisy? Weird word.

Speaking of weird....I've made a discovery and I believe it to be 100% true. Nobody can convince me otherwise. Here it is.....kids are weird! That's it. I'm around kids all the time and they are weird. They say weird things....do weird things.....they're just weird. Even high school, soon to be adult, kids are weird. My Cross Country team is weird and I shared this same speech with them last week in our team devo. I told them they are weird. Don't get me wrong, I love them and I love being around them each day.....but they're weird. Especially....ok, really only...my guys team. Here's an example....I came to our field house one day last week and walked into the guys' side. Here's some pictures of what I saw..... 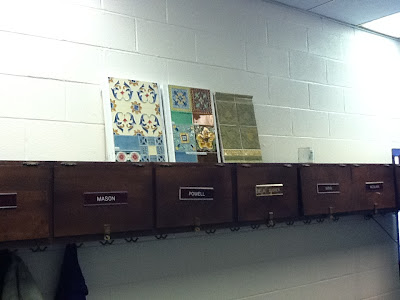 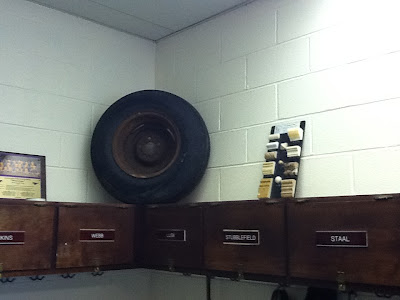 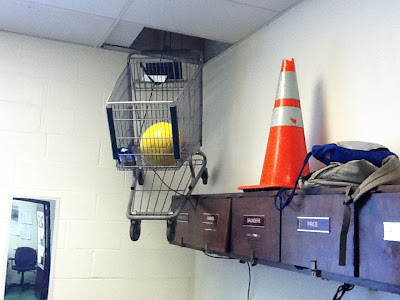 Apparently, the day before, during their "run", they had found some nice items to decorate the field house with. I call the items TRASH but they call them "art". After I had left for the day, they had taken the time to hang up these items and decorate. They love it. I think it's pretty dumb to be perfectly honest but whatever. It's their field house. And I told them, if that's the weirdest thing they do all year, I'll be just fine. Just don't be too much weirder. Maybe pushing a grocery cart while running is a better workout anyways. But it backs up my point....kids are weird. I'm weird too sometimes. Maybe that's why I like being around kids so much. We're all weird at some point....right? I propose today that maybe we should be weird. In fact, I have no doubts that we should be weird spiritually.

Here's what I mean....being "weird" means being different. And aren't we called to be different? I told my runners that I'm fine with them being a little weird in their choice of decoration, but I'd also like them to be weird spiritually. I'd like for their friends and classmates to think they are weird when it comes to their spiritual life. Maybe they lead a prayer at a random time....weird! Maybe they talk about God in their conversation....weird! Maybe they even turn off their radio while driving around with friends and sing a song to God.....very weird! That would be very hard for them, I know. That would be hard for any of us. We don't want to be weird. We want to conform and be like everyone else. We want to fit in and be the same. We want to be accepted. Being weird sometimes means being excluded. But if enough of us are weird, maybe being weird won't be so weird. Say what?

Romans 12:2
2 Do not conform to the pattern of this world, but be transformed by the renewing of your mind. Then you will be able to test and approve what God’s will is—his good, pleasing and perfect will.

It may be uncomfortable or awkward or out of our comfort zone, but we're called to be different...to be weird.

So be weird today. I'm trying to be.