10:32AM
Yesterday in my Social Studies class, we were talking about the "T 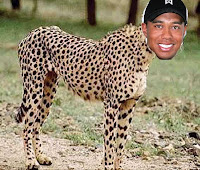 aiga" in Russia which are forests of evergreen trees. I told them that since another word for forests is "woods" that you could call them the Taiga Woods (Tiger Woods). One of my 6th graders then said "So are there cheetahs there?" I tried to keep my composure and just rolled my eyes as the kid nearly rolled on the floor laughing but I was laughing inside. I thought it was actually pretty clever and I'll remember that one.

Saturday is the big day. My son's first 5K. Hey Hey Hey. Sorry - got on another rhyming tangent. But he is excited. I was excited about 2 months ago when he came and asked us if he could do it. He has worked really hard and I think he's ready. Since it's his first, we're just going to take it easy and not push. Well, who am I kidding, I may push a little. That's my nature, but I really will be watching him and making sure he's okay. Secretly, I would love for him to place and get a medal or whatever the prize is. But I certainly haven't mentioned that to him. The only thing we've told him is to finish, whether walking or running, we want him to finish. And he will.

But I do have to tell of last Friday - his first ever attempt at 3 miles. We decided to do it early, right after breakfast when the weather was still cool. He was ready and pumped and I was too. We had a good, fairly flat route - 1.5 miles down, 1.5 miles back. We started out and the weather was good. It wasn't too hot yet and our first mile went great. However, right after we passed the mile marker, I started hearing a slight whimper. Not good. Personally, I think we should have gone before breakfast or waited a little longer. I don't think his breakfast was digested enough even though he hadn't eaten much. The whimper meant his side was hurting. He has struggled with that some. I used to as well. I can remember it being really bad, but it never bothers me anymore unless I have just eaten. Go figure. Now, I stretch out my side really well before I run which is something I stress with my cross country teams as well. We have stretched out my son's sides each time, but for some reason it didn't work on this day. We had gone about 1 1/4 miles when he asked if we could walk. I'll be honest. I hate to walk, but I knew he needed it so we did. We walked maybe 100 yards and then he said he could run again. He made it another 1/4 mile before he asked to walk again. We continued this pattern for the rest of the run. He was nearly in tears a couple of times as his side was really hurting. I told him we were almost home and that he was doing great. Then it happened.

As if things weren't bad enough already. He was already in pain and also upset b/c he knew our time was going to be slow from the walking. But things would get a little worse. When we were about 1/4 mile from home, his foot caught a vine sticking out into the road and he tripped. He fell hard. It happened so fast, but I saw it just in time to see him land right on his elbow. The amazing thing was that h e jumped right back up and kept running through tears of pain. I told him we could stop but he said he wanted to finish. I could see blood running down his elbow as he ran. He finished in tears. Luckily, his mom was there to cheer him to the finish and console him at the same time. Our time was still 30:47 which I thought was great considering all he went through. He ended up with a bad elbow scrape and a bruised hip. It was a tough day.

We tried 3 miles again on Sunday with all food digested and new rules to stay on the road unless a car was coming - nowhere near the side and those deadly vines. He ran the whole time with no tripping and finished in 27:05, right on pace. Can't wait to see what we can do Saturday.
It's a flat course with ice cream waiting at the end. What could go wrong?
I'll post a race report Saturday or Sunday. Until then...
Keep runnin',