And Third Place Goes To....

I just realized that I have nearly 10,000 views on this page. That can't be right, can it? I could've sworn it only said three thousand something just a month ago. Maybe the counter broke or maybe someone just clicked on it 6,000 times to be nice. I can't believe it's been seen 10,000 times!! Maybe I just have thousands of fans and I'm just too humble to see it. Naaah, that can't be it.

Anyways, it was a great day!! One of the best ever. We woke up at 6:15, and I went to wake up Carter. He popped right up. I had told him last night that I would wake him up early and he needed to get on up and get ready. Apparently he took that to heart. I told him he didn't have to get up quite that fast. We went in the kitchen to eat a quick breakfast so it'd have plenty of time to digest. Bagels and bananas. Good runner breakfast. We jumped in the shower, got dressed, and headed out to the race. We wanted to get there early and get a good parking spot. We did.

The race was very well done. It was put on by Purity Dairies here in Nashville but there were lots of sponsors so there were a lot of activities and things to see. It was pretty crowded as they said it was a record number for the tenth running. We pinned on the bibs and put the chips on our shoes. This was 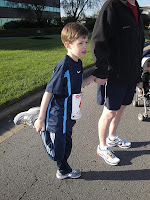 all new to Carter and he was still very excited. I could tell he was getting a little nervous because he kept asking me if we could go to the start line even though we had 30-45 minutes. I told him we would get there soon. We ran into friends, Nate and Andrea who had biked down. Lauren and Ryan, new friends from church. Ryan was running (and would end up winning the whole thing in 15:2? - an amazing runner. Ryan was the Fleet Feet shoe guy. Read 2 posts down. We went to the start line about 15 min. before it was to start. We got towards the front even though the start chute was pretty narrow. But I wanted us to go ahead and get out even though I knew we'd be passed left and right. We were.

The gun sounded and we were off. We got out to a pretty good pace. I've never been really good at pacing. I knew we needed to run around 9 min. miles to get our goal time of 28 min. or less. So I just picked a pace that I thought was maybe a little faster than that and stuck with it. Carter was keeping up with me well so I went with it. We hit the first mile at 8:30, a little fast but a nice cushion if we slowed down. The only thing I was worried about was Carter's side hurting (see previous post) but it never did. T 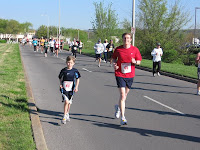 he weather was PERFECT. Nice and cool. The course was unbelievable. By far, the flattest course I've ever run. There was one slight hill that was about 10 feet long but that was it. I kept talking to Carter every so often just asking how he was, reminding him to breathe deep, reminding him to stay away from the curb, etc. etc. etc. But I was so proud. He ran his race strong, never complained, and did amazing. We hit 2 miles at 17:10 so we slowed down a little but still we were ahead of our goal. We picked it up a little for the finish and I knew we were going to beat our time. It just felt great.

Now, we had told Carter that the main goal was just to finish. We told him not to expect a medal being his first race and that we didn't know how the competition would be. But you know deep down we were hoping. 1-3 place in each division gets a medal. He was in the 0-9 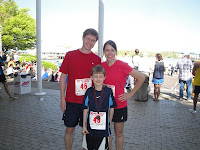 division. So it was pretty tough when a kid that had to be 6 or 7 passed us in the last tenth of a mile. I saw him passing us and told Carter to give it everything for the finish. He did sprint like crazy but he couldn't catch the boy. It was still a great finish. I stopped my watch and was shocked. 26:23! Over a minute and a half under our goal. I told Carter as we got the chips cut off and grabbed a water bottle. He couldn't believe it. Before we were out of the finish chute, he told me he wanted to do another 5K soon. We will. Maybe Memorial Day. I've got me a runner on my hands!

My wife Susan also ran her first. Her goal was also to finish although she said she'd like to beat 36 min. She thought she'd probably have to walk. 2 miles was about the furthest she'd run in her training. She ended up not walking at all and posting a 29:37. Not too bad for the old girl! I was very proud of her too. 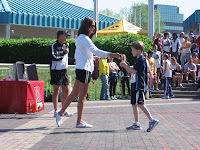 We went to the finish area and got our free ice cream, spaghetti, rolls, etc. Like I said, the race was well done. We sat and ate and waited for the awards ceremony. I told Carter again not to expect anything but I was hoping deep down. The had door prizes. We won a pen. Better th 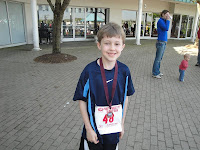 an nothing. The announcer was a local news & sportscaster - John Dwyer from News 2. Finally, after door prizes and other announcements, he got to the 5K results. Our division was first. "For the 0-9 division, in third place, Carter...." We didn't wait for the last name. We cheered and Carter got the biggest smile I've ever seen. He got third place and medaled. He was so excited. I was a very proud dad and it was a fun, awesome event.

Can't wait for the next one. Now on to the half marathon in 2 weeks! 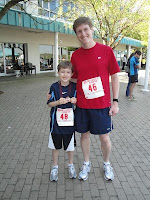