Today was a good day. Running wise. But in other ways too. I got to sleep in. Cinnamon rolls for breakfast. Got to see my sons' basketball games. Youngest son scored in his game and they won. Oldest son didn't score and they lost, but he played well. Great defense and he's getting better. Great weather today. 50's. Maybe low 60's. It was a good day. Running wise - it was a great day.

I ran in my first 5K of the year today at the Nashville Zoo. I did this one two years ago. I took it off last year but decided to try it again this year. It was the first 5K that I've done twice so I knew the course and knew what to expect. My time in 2008 had been 23:13 and I remembered it being a pretty tough course. There are a lot of hills at the Nashville Zoo and A LOT of sharp turns. You are actually running through the zoo so the paths aren't straight. You curve around the animal enclosures and literally run through every nook and cranny of the zoo. I told my wife tonight that they don't leave ANY of the paths out. It's almost like they squeezed every ounce of path into the run through the actual zoo so they could get 3.1 miles and not have you run out of the gates very much. But it's a fun race.

I got there around 2PM. Race was to start at 3. Found out quickly they were postponing 15 min. b/c of heavy traffic. It had been difficult to turn into the zoo. They needed a police officer directing. I registered, got my bib, t-shirt, and chip. T-shirt was cotton. Yuck. I like synthetic. Is that what it's called. That wickin' material. I like that. Oh well, cotton will work. Nice design anyways. It was only 2:10 at that point so I went back to my car to put on my bib and chip. I listened to the radio until about 2:40 and then headed to the start area. I saw a couple of people I knew across the crowd and waved but decided to stay put and not try to wiggle my way through. A friend found me and we stood and talked for a while. I soon saw my wife and boys watching across the crowd on the h 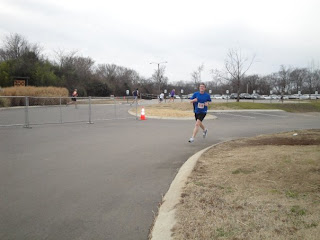 ill. I was so happy to see them there. My oldest had a b'ball game at 4 so they weren't sure if they would get to come but it's so nice to have family there and it made me feel great. The race started promptly at 3:15.

I was not in the very front so the start was a little rough. I was having to weave around people and run up on the sidewalk to find my place. But I felt good the whole time. I could tell I was going pretty fast. When I hit mile 1, I looked down at my watch. It said 6:08 I think. Wow - way too fast. But I kept going knowing I'd slow down eventually. I did slow down a little but not much. Right after the mile 1 sign, you actually enter the paths of the zoo and start weaving. I remember seeing elephants, tigers, zebras, and lynxes (is that a word?). I probably could've seen more but I wasn't really looking at each animal cage. I hit mile 2 at 12:50. I had slowed down some but not too bad. Could I hit under 20? I thought it might just be possible. 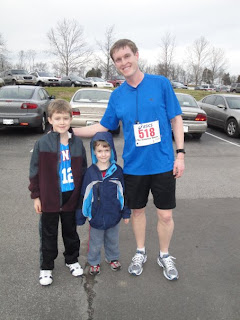 I didn't have a big time goal in this race. I thought I might like to run in the 21 minute range. Like I said, I ran 23 two years ago but I felt I was in better shape today so I hoped to improve a couple minutes maybe. When I looked down at mile 2 and realized that I might beat 20, that felt great. I was breathing pretty hard. I'm pretty sure I scared the little girl that I was running beside at that point. I was tired but I picked it up and passed her. I really wanted to beat 20 even though I never dreamed I would before the race began. Close to the end of mile 2, you hit Meerkat Hill. That's an unofficial name, but that' s what I call it. It's a very short but VERY steep hill next to the meerkats. That was tough. 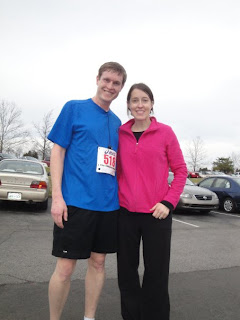 on knowing it was getting closer. You run out of the entrance gates and approach the finish line in the parking lot. Even though I had my Ipod going, I heard "go Albert" when I came out the gate and knew my family was still there. They had stayed. That meant the world b/c I knew they needed to leave to get to the b'ball game. I turned on the sprint and headed toward the finish. I saw the official clock approaching 20 min. so I sprinted even faster. I stopped my watch at the finish and looked at it. 19:48. That's unofficial. I'm still waiting for them to update the website for my official time, but I beat 20. I can't believe it. When I ran 20:28 in October, I never thought I could beat 20. I felt that would be my best, so I was really excited to beat 20 for the first time since high school. Actually, in high school, we ran 3 miles for Cross Country so this is technically the first time I've beat 20 in the 5K distance.

Needless to say, it was a good day. I'll run 12 in the morning and look toward my half marathon in April. I may have another 5K in March. Just found out about that one last night. More info. to come.