The Hotel from Down Under - And I Don't Mean Australia

I had every intention of running last night but I was so tired. I think I'm on a bad schedule where I am getting tired really early (7-8 PM) and am waking up early (4-5AM). I can't seem to get off that schedule. I would rather get tired around 10-11 and wake up around 5-6 but I'm about an hour or two off. Anyways, I got up this morning around 4 and ran the five miles. So technically I did it today (Wed.) but I'm counting it as my Tuesday run b/c I have every intention of running tonight after church. But I may do it tomorrow morning. We'll see.

Well here goes. The hotel story. As you know if you've read any of this blog, I am running a marathon in a little over 2 weeks in Memphis. About 3-4 months ago, I decided I needed to start looking for a hotel. The race starts at 8AM so I didn't want to drive from Nashville that morning, plus I needed to register on Friday anyways. So I began looking for a hotel. I knew that Susan and the boys weren't going to go for good reason so I began looking as cheap as possible. My feelings on hotels has always been that it's just a room. Now don't get me wrong, I like nice hotels and the few times I've been privileged to stay in one have been great, but I'm basically fine staying in anything with a bed. That's why we stay cheap at Disney. We're only in the room awake for a couple of hours at most so what's the point of paying a lot of money for a huge room. I realize that if I had the money, I might feel differently, but I would hope I wouldn't. All that to say, since my family wasn't coming to Memphis, I knew I would just find a cheap room and go with it. On the race website, they had a list of hotels, how far they were from the start line, and how much they were per night. I scrolled down and down and down until I found the right price. Distance didn't matter as much since I will have a car. I knew when I saw the Super 8 only 2 miles from the start at the low low price of $45 a night, I had found my room. I clicked on the hotel website to get the number and happened to notice the reviews. Holy cow - the reviews!! Pause on that story because it leads me to another story....

In 2005, I was in charge of planning the reward trip for our church. I work part time at our church with t

he youth and have been in charge of the reward trip for many years. The reward trip is just that - a reward for those that have participated in a certain number of service projects throughout the year. In 2005, the reward was King's Island in Cincinnati. I was in charge of finding hotels, getting park tickets, getting a list of those going, etc. etc. I always find several hotel choices and then take them to the youth minister so we can discuss the best options. We decided (and I'm gonna use "we" here so everyone can't put ALL the blame on me) to go with the Econo-Lodge in Erlanger, KY for our first night. It was cheap, not too far outside of Cincinnati, and looked pretty nice on the internet. On the day we were supposed to leave, I just happened to be watching the news and noticed the top story about how a couple had escaped from prison (from right here in TN by the way - ironic?) and had been caught in Ohio. Click here for the story if you just really have a lot of time to waste. Before the couple was caught (after murdering a prison guard no less), they had stayed in, you guessed it, the Econo

-Lodge in Erlanger, KY. I called my youth minister immediately. We called the hotel. They said the hotel had been cleared and all would be fine. All would not be fine.

When we arrived at the Econo-Lodge that night, it took forever to get checked in. I had specifically asked for non-smoking rooms and I think 4 out of 15 rooms were non-smoking. The hotel was next to a very loud bar with music. The rooms were disgusting and didn't seem to have been cleaned in months. So while I was dealing with all that, I kindof forgot about the news story. It never crossed my mind that the room where the fugitive couple had stayed would be given to us, or for that matter, be available to anyone. But as you've probably figured out, room 111 was assigned to us. We still didn't know that was THE room and we hadn't told the kids about the news story, but some had already heard and it spread quick. We assigned four high school boys to room 111. They quickly came and told us about the room. I still wasn't convinced it was THE room until I got to the room and some scary looking lady was sitting in her car in the parking lot and said (and I quote), "Room 111, right thar, that's them criminal's room."

Why me?
It was filthy (which matched all the rooms) but there was a very specific and large blood stain on the bed spread (by the way - the fugitive had been shot in the escape). 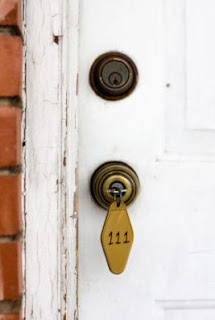 I am realizing as I'm writing this that I still can't believe it really happened. Sorry - got off track.

Now the boys were okay with it. They were a little upset but in a funny way. They filmed it and made jokes. We realized afterward that we should have asked for another room, but it was so late and we were so confused by it all that for some reason we didn't. These boys' parents were less than happy when we got home and rightly so. It was a nightmare come true. We laugh about it now but it really wasn't funny at the time. By the way, I would later complain and get an apology letter from the hotel management - didn't help much. I will never stay in an Econo-Lodge again. Period.

Now, I told that story because one of the boys in room 111 that night was Mark Slagle - the same Mark I previously wrote about who will be my roommate in Memphis. I booked the hotel before I knew he was coming. When he offered to run and I asked him if he wanted to share the room, I forgot all about the reviews and the above story. Click here to read the reviews and you'll see why this story is funny. The reviews match the description of the Econo-Lodge from 4 years ago. In fact the 2nd one matches the title

of this post - just not quite as nice as I made it. When I told Mark about the reviews, he just laughed. He might not be laughing in 2 weeks. The picture makes the hotel look pretty nice but I'm sure that's deceiving. I really want to run this race so I'm just hoping I make it to the start line after a night in this hotel. I'm assuming it is probably also in a scary part of town as I've certainly heard that Memphis has some scary parts, actually a lot of them. No offense, Memphis. Well, at least we'll have each other and won't be alone, which was my original plan. I don't mind a dirty room too much as long as the bed is sleepable. Is that a word? I guess if someone scary comes knocking on our door, we can throw Super 8 soaps at them and hit them over the head with the ice bucket, if we even get one. Please pray for our safety - and I'm pretty serious about that. I'm sure we'll look back and laugh on it as we already have but I hope nothing happens to take that laughter away. Oh well - I know this is way too long, but I had to share.

Better go work on my karate.