My leg is getting better. Sunday through Wednesday, it was pretty bad. It was a little better beginning Thursday. Today it feels almost back to normal, but definitely not 100%. I think I set myself back a few weeks after last weekend's goofiness. It feels like it did in mid-December when I was really worried about Disney. 2 weeks off helped it to get better but now it's like it never left. I really want to run. It felt so good to finally be back up to running each day or almost each day and now I can't again. But I guess that's to be expected with running a marathon and a half. I may try a short run Monday just to see how it feels.

Well, congratulations to my Auburn Tigers. What a game last Monday and a season! I got back in time to watch the whole game Monday night and it was the game I've been waiting for. It wasn't quite the offensive battle I was expecting. In fact, the 3rd and most of the 4th quarter were pretty uneventful and dare I say...a little boring. But the last 5 min. or so were great and it wasn't a knockout, but a win's a win. I'll take it any way I can get it. We are National Champs. It capped off a great weekend.

I'm having a little bit of the post-Disney blues. Kindof like when you are on the way home from a Disney vacation. It was such a great trip and while it was so great to get home and see my family, I am kindof sad that it's all over. I'm already looking forward to our nex

t trip down there. So I thought I'd take some time here to list my top 10 favorite moments from last weekend. Maybe that'll help extend it a little, at least in my mind. Here they are in order:

#10 - Getting my picture with Buzz Lightyear - I took 5-6 pictures with characters. Why was this my favorite? Because it was the first. The first was just a little more special I guess. It was in Magic Kingdom in Future World. The sun was starting to come up so you could actually see. He had only one other runner stopped there so I decided to stop. It was the first of several pictures. I know it's a little cheesy and immature for a 35 year old man to stop and get pictures with Disney characters but I don't care. It's Disney and I decided to enjoy it and have fun. Buzz was the first to take the time and pose with me so it was #10 on my list.

#9 - The little candy bars - We had just entered Hollywood Studios. I knew I was home free. I was starting to feel good, excited about the finish. But I won't lie, my legs were hurting and I was tired. We rounded the corner back behind the backlot tour and were approaching the tunnel you go through when riding that. There were severa

l people standing there handing out things. I assumed it was water again or bananas. We had had those a few times. No, it was little candy bars. I was so excited. I love those things when I'm not running but when I'm tired, hungry, in need of energy....they were a huge blessing. I grabbed like a crazy fool. I know I made some drop and I felt bad, but not that bad. I got 3, ate 2. They tasted so good. I saved one for after the race. Even better. Who knew these little things would make a top 10 list?

#8 - Running Around World Showcase/Chariots of Fire. It was almost over. I saw the mile 25 sign. I had one mile and some change left. The song started playing. Perfect running song to end with. I usually skip over that song if it plays on my training runs but it was too perfect for the end of this journey. The scenery running around that giant Epcot loop was beautiful. It was just a perfect end to a perfect race.

#7 - 3 Medals!! - I could also add 3 t-shirt. It's nice enough to just get one medal for running a race. I know it's just a piece of medal. I know I actually paid for it with my entry fee. But it's just a nice feeling to have a medal placed around your neck. It's a nice tribute and re minder of all you've accomplished. And to have it done 3 times in 2 days was wonderful. The medals look great. They're heavy. They're perfect and I appreciated the fact that I got 3 for this adventure.

#6 - Meeting Friends - I've rarely had the opportunity to meet up with running friends I've never met. I do nearly all my training runs alone, but then I have this group of friends through "dailymile", "twitter" or "facebook" that share in my runs each time. It was really good to meet a few of them that I knew and a few that I didn't know. It's nice to talk with others that share your interests and love of running. I enjoyed this each morning.

#5 - Running through the castle - I had heard several times before that this was a great part of the race. It's short. It's 10 seconds max. But it's wonderful. Dare I say it....magical? You come out of the castle to cameras flashing, a huge crowd cheering, and music blaring. It's just a really special part of both races - the half and full. I loved it both days and any pains that I had at that point were "magically" gone as I ran through that place.

#4 - Running down Main Street during the half - It was great during the full too, but there was so 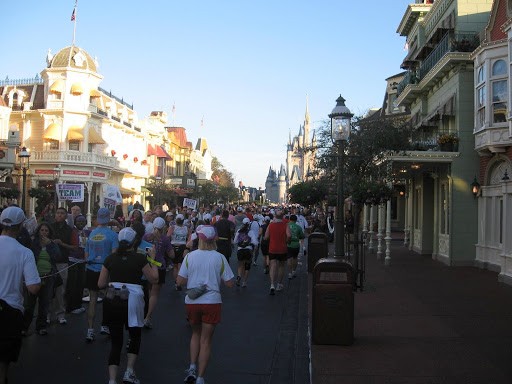 ng the whole weekend because we started that race outside of Epcot. Main Street was jammed with people. It was so loud. The castle was directly in front of me. It was....I'm sorry....magical (again.) I love going down Main Street anytime, but especially during this race.

#3 - The Beginning of both races - Wow! That's the best word I can think of. The fireworks, the fire shooting up in the air, the music, the characters on stage. It's just the best way to start a race I could ever think of. And I got to see it twice. Up close. The guy behind me actually had to give me a push to start on the 2nd day because I was just standing there watching and not paying attention to the fact that the race had started. I just wanted the start to go on forever.

#2 - Linking up to Iraq - This was at the beginning of the half-marathon and it was very moving. At least it was to me and I think it was to a lot of people. A group of soldiers in Iraq ran a simultaneous half-marathon to ours. And they also interviewed a soldier whose wife and daughter were at Disney. That was the most touching part. I just thought that was a great idea and just another thing that made these races so special.

#1 - Hello? The Finish Lines!!! - Any marathon (or half-marathon) runner will tell you that a finish line is the most beautiful sight in the world. It feels amazing to cross one. I got to cross two amazing finish lines in two days during two outstanding races. The crowd at the line was so big. The biggest I've ever run through. All the characters were there. It was just an overwhelming feeling of accomplishment, excitement, and happiness to cross that line on both days.

So there you go - my top 10. I could list ten more but I won't. I plan to work on a little marathon recap video this weekend so that should be my next post. Until then....