It's over. My 2nd marathon is in the books. It's hard to believe it's done. So here's the report in a lot of detail. If you want the "Cliff Notes," let me know.

I slept so good last night. I was in a run down motel in a scary part of Memphis, but I slept great. I was so tired. It was so cold outside but so warm in our room. It was a great sleep. Mark agreed. He slept good too. He said he hadn't gone to bed that early (11:00) since high school. I believe him. Our cell phone alarms went off at the exact same time. Exactly. No lie. It was freaky. 5:30AM. We got up, showered, put on our race stuff and checked out of the hotel. Went out to our cars, crossed our fingers that they would still be in one piece, they were, loaded up, and headed to the parking garage downtown. Oh yeah - it was stinkin' freezin'!!! I mean cold. In the 20's. It was 26 at the start of the race so it was even colder when we got there. We walked to the finish which was at the baseball stadium so I could check my bag. We had to shed our coats at that point because otherwise we would have to leave them when the race started. Now, Mark already had on shorts which I thought was crazy, but when he took off his jacket and had nothing but a t-shirt, I knew he was nuts. I had on long pants and 2 shirts (one long, one short). And I was freezing. How he didn't die on the spot of hypothermia I'll never know. We walked back to the Forum and thanked God when we saw it was open and warm inside. We just hung out there for a while and talked and watched people. They had bagles and water. I was a little unimpressed with the breakfast selection. Nashville is better in that regard but that's about it. Keep reading.

At 7:30 we decided to head toward the start line. We got in corral 4. You could choose your corral based on your projected pace. I decided I was going to try and stick with the 3:45 pace setter. I knew I was trying to break 4 hours so I figured sticking with him would give me a little cushion if I needed to slow down later in the race. It was very cold just standing out there. Everyone was jumping around, moving, and stretching to keep warm. I had my trusty socks on my hands since I forgot gloves. They weren't doing squat. I might as well have been holding ice cubes. But I guess it was better than no gloves. Sorry Mark. The race started right at 8. Our corral slowly moved up. They were letting a corral go every 1-2 minutes. Our corral got up to the start and the announcer said go. My 2nd marathon had begun.

I was excited that I was going to try and stay with a pace setter. I've never done that before. I don't know why. One of my biggest problems in my previous races has been going out too fast every time. This would force me to stay on pace the whole time. The start was great. The first few miles were great. Right after mile one, someone threw a knit hat into the bushes right in front of us. Mark did a spin move, stepped into the bushes and grabbed that hat. I told him I saw lice falling from the guy's head but he didn't care. He tried it on. Didn't fit well or something. He left it for someone else. Mark and I stayed together for the first 7 miles or so. Around mile 2 or 3, I guess we both realized that 3:45 pace setter was going a little too slow. We sped up and caught up to the 3:40 guy. I thought that still wouldn't be too fast but would build an even bigger cushion, plus I was starting to slightly fill the urge to go to the bathroom so I needed a little extra cushion when bathroom time hit.

It hit Mark around mile 7. He ran for a port-a-john and said he'd catch up to me. He never did but that was fine. I was happy we'd stayed together that long. He was doing great and I was very impressed, especially since 8 miles was the longest he'd run in his training. He would end up running the whole way and getting 1:50 in his first ever half-marathon. That's awesome and I'm extremely proud of him. He had to leave right after the race to go back to Harding, but we talked on the phone later. Let me just say here that it was so nice to have a friend there to room with, run with, and talk with. It made the trip 1000 times better. Ok, back to me.

I was having a great race. The weather was PERFECT!! It was cold for the first 3 miles but after that I wasn't cold anymore and the cold air felt great! I could've shed my sock gloves but I kindof didn't want to. My hands were still a little cold, plus they made a nice sweat and (sorry this is gross) runny nose rag. Only problem - I had worn those socks the night before so every time I wiped my forehead or nose, I had to smell them. They stunk. I would end up wearing them the entire race. They eventually didn't smell as bad or maybe I got used to it. But those socks were good to me. I hated to throw them out, so I didn't.

Around mile 10, I knew I would have to use the bathroom soon. I just can't go a whole marathon without going. I repeat what I said on my last marathon report - "anyone who can go a whole marathon without using it is a hero in my book, bladder of steel." I hated to stop for 2 reasons. One - sometimes when you stop, your legs will stiffen up and it's very hard to get going again. Two - I didn't want to lose my pace guy. So I sped up and got a little ahead of him. But I soon had to stop. I found a port-a-john at mile 12. I was done in 25 seconds. It would've been 15 but I couldn't get my pants untied. Stupid knot. I came out of the john running. I decided I just had to go for it and hope my legs wouldn't stiffen up. They didn't. When I came out, I could see the 3:40 guy up ahead. I would have to speed up a little to catch him but it wasn't too hard to do that. I caught him.

Now, mile 14 was where I had to stop on the last marathon. When I got to that and felt great I knew this race was going to be different. Let me just say here that I listened to my Ipod the entire time for this race and it really helped. I know it's "frowned upon" and "real racers don't need music" blah blah blah, but I don't care. It helps me. I find myself really listening to a podcast or singing along with songs and it's great. I don't care what anyone says. It helped and I'll probably do it the next race.

Miles 18-20 were probably the hardest but even then, they weren't that hard. This race just went really well. I love the course. I love the crowd. I love the spectators. I meant to say that from mile 5-6, we actually ran t 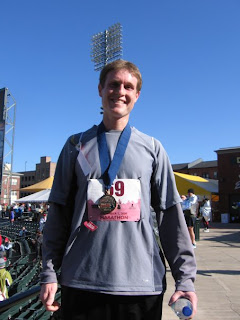 hrough the St. Jude campus and there were many kids cheering us on. That was awesome! But I loved this race. I would love to do it again some day.

22 miles is the longest I've ever run without stopping. When I got to 22 and still felt great, I knew I was going to run this entire race without walking. That made me feel really good. I felt so good that I sped up a little and moved ahead of the 3:40 pacer guy. I could see downtown approaching again and I knew the finish was getting closer. That was motivation to go a little faster. Now mile 25 seemed to last forever. I guess I was really anticipating the finish. Plus, at the end of mile 25, they make you go up this short but very steep hill. I, along with everyone around me was saying "what in the world???" But when you get to the top, you see the "mile 26" sign and it's all downhill from there into the baseball stadium. The stands were full of cheering spectators. The announcer was looking at numbers and calling out names. Not sure if he called mine or not. I was too busy listening to the cheers and screams. I crossed the line and stopped the timer on my Ipod. It said 3:38. I couldn't believe it. Not only did I beat four hours, I beat it bad.

They put the medal around my neck. It felt great. We were ushered to the food/drink area for runners. Very awesome. So much better than Nashville (which is granola bars and water basically). Memphis had pizza (!!!), doughnuts, cookies, fruit, soda (!!!- that was the best tasting Sprite I've ever had - I'm serious), hot chocolate, water, powerade and probably more. I pigged out.

I felt I deserved it. I ran into Nate and Andrea again. They took the two pictures you are seeing. The small figure in black is me going through the finish line. I walked to my car and drove the three hours home. It went by fast because I was having that runner's high.

Needless to say, it was a great day and a great trip. I had an amazing time and I can't wait to run the next one. Who knows when the next full will be? I'm running the Nashville half in April but that's all I have on the calendar right now. My official time, after looking on the results webpage, was 3:38:55. I'm very pleased with that. It'll be hard to improve upon but we'll see. I was also very proud that I didn't walk like I had to back in April in Nashville.