I did a 10 mile long run on Sunday. Just a week after the marathon. I probably should have taken a week off of long runs, but my training for Disney was supposed to begin on Sunday. That's right. It worked out that I was supposed to start training the exact week after the Chicago marathon. What are the odds? I was technically supposed to do 12, but I decided to just do 10. I did the same route that I did back in the spring when I twisted my ankle going through a construction site. Construction was gone this time. I enjoyed the route. Problem was that I got to the nature park before it was light. I thought it might be closed, but two park security officers were standing at the gate. I could barely see them. A little scary. I yelled out "is it ok to run through?" One of them told me yes but to be careful. I did have to be very careful. I couldn't see 10 feet in front of me and there were no lights whatsoever. This is the park where the road was heavily damaged by the May floods so it was a little nerve-wracking running through it in the pitch dark. I was also a little worried about running into a deer. There are so many and they're almost not afraid of humans anymore so I could just see myself running smack-dab into one. I definitely heard them, but didn't see any. So it worked out well, but I'm not sure if I want to do it again in the dark. I think I'll wait until the time changes. But the good news was that the run felt good. Very little aches and pains leftover from the marathon. My knees are hurting a little at the beginning of my runs, but it goes away quick. I'll try 12 this weekend, but will have to do it on Monday before school b/c my wife will be babysitting/housesitting on Sunday. I gotta stay home and watch the kiddos.

Speaking of kiddos - we revealed this weekend that we've got another on the way. Little runner #3. A surprise, but a definite blessing. I've known since August 13, but we decided to wait a while to share. Here he or she is: 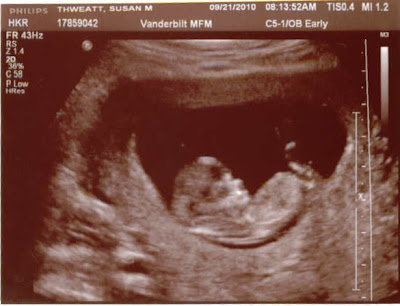 We'll find out Nov. 29 if it's a boy or girl. I don't care. I just want healthy and safe. I feel so blessed to have a third one on the way. God's been good to our family. So now I'll have three runners in training.

Cross Country is going pretty well. I lost my third boy runner this week to a stress fracture which is tough, but we'll keep pressing on. Only 3 meets left and 3 weeks left. It's been a great season and I'm excited to see how it finishes out.

That's all for now. Not much else going on in the running world. Hope everyone has a successful and safe week. Be careful out there but.....